I begin tonight’s program with a look at the chart of Hillary Clinton announcing her presidential candidacy with the Sun conjunct Eris. It’s a chart so interesting it makes me wonder whether she didn’t have an astrologer elect the time for her. I also consider the various versions of her chart, and explain why I am using a chart that nobody else seems to use, which has her as Cancer rising. In the second half of the program I continue my discussion of digital conditions and how we are being trained to be stupid by computers. I also wonder out loud about what the digital environment is doing to “digital natives” who don’t know much else. Here is the chart for Hillary’s announcement as well as the natal chart I’m using. Note that in the program I am using an announcement chart that’s 10 minutes later than reality. It does not change the chart much but it does make Bill’s Sun’s contact with the ascendant a bit less dramatic — but not much. My musical guest is Sloan Wainwright. 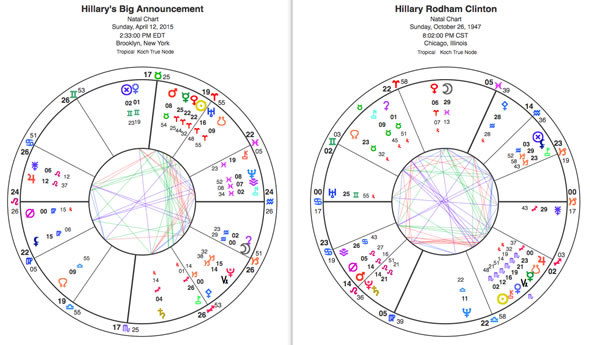