Here is the second episode of Vision Quest Radio. This continues my special series on 2016 astrology and how I am using it in the Vision Quest readings. The written readings are on schedule to be published Thursday; prior to that, we are holding the price at just $77 for all 12 signs. You may purchase individual signs here from $24.95.

In tonight’s program, I consider the Uranus-Eris conjunction in Aries. This aspect is unprecedented for 99% of people alive today, and its effects are as unpredictable as the two bodies involved. Previous conjunctions saw the conceptual birth of the “Analytical Engine” and a breakthrough in quantum physics.

I look at several other conjunctions to Eris, including those of Saturn and Chiron, to suss out this aspect. There is a lot here about the evolution of women’s rights, and the concept of female personhood.

Please see below for more information on Vision Quest. I look forward to being your astrologer for 2016 and beyond.

On Seeking Clarity, and the Quest for True Vision

In our moment of history, it’s difficult to see anything clearly — ourselves, our lives, the world, the future, even the past. We live with a feeling of being constantly on edge, or on the edge, often straining for clarity. Respecting this state of existence, my 2016 annual edition is called Vision Quest, and it’s focused on our need to go beyond clarity; my intent is to help you discover and focus a vision for your life. That’s what the planets are describing, and what I am hearing. 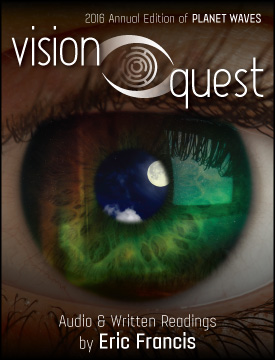 First, though, I have a short story for you, about the spiritual path we call astrology.

One of the first spiritual books ever given to me was Illusions: The Adventures of a Reluctant Messiah. Written by Richard Bach while, unbeknownst to him, Jonathan Livingston Seagull was becoming an international bestseller, this book helped put a lot of people on the spiritual path — maybe even you.

Illusions is the story of an unusual man named Donald Shimoda whom Bach met while flying around the country in his antique biplane, hopping from hayfield to hayfield out in places like Kansas. This was Bach’s version of a Vision Quest.

Shimoda, a fellow barnstorming pilot, has a book of aphorisms containing bits of wisdom for people on the journey of self-awareness. In it is the idea that “we teach what we most need to learn.”

Each autumn, wherever in the world I may be, I set out on the annual edition of Planet Waves. I prepare intimate, spiritually grounded readings for you, relating to the 12 Sun signs and rising signs.

Each annual comes with a collection of articles and art which I think of as being a record of the times in which we’re living.

Each year’s readings reflect the peculiar astrology of the moment, with its special challenges and opportunities. Each is an original journey into the unknown — something I’m now doing for the 17th time. Each of these readings is a marker in time, and all of them are available to return to.

Uranus Conjunct Eris: On the Way to Self-Mastery

The other day I had an idea for a practical joke, which was to find a place that does low-run quantities of business cards, and have one for every possible activity I might say that I do professionally (publisher, medieval prognosticator, artist, poet, musician, photographer, astrologer, writer, reporter, consultant, dog nibbler, naughty boy, and so on).

Then when it’s time to do the ‘give the person my card’ thing I would hand them a stack of cards and ask them what they want me to be as they pick through my various occupations. I don’t want to decide — you decide! I’m curious what you think.

We’re not living in the old days, when you were simply a mechanic or pattern maker or tire salesman and that was it. Till recently, a person could be punished by society for mastering two arts — not taken seriously in either field, called ‘jack of all trades’, and so on. As with many other forms of monoculture, it was mandatory to choose.

Now, many people carry around a few different business cards. It’s essential, as the concept of a job is disappearing and it’s becoming increasingly necessary to be self-employed. The internet has pushed this into hyperdrive.

Yet the identity crisis we live with goes much deeper than one’s concept of their true work. There are many competing forces that want to define you as them — potentially among them, Apple, Google, Subaru, the Catholics, the Democrats, your family, your partner. The way I read astrology, Eris (representing discord, faceting, fragmentation, among other things) in Aries (self-concept, name, identity) tells this story. This transit has been going on since 1925 and it’s not over any time soon.